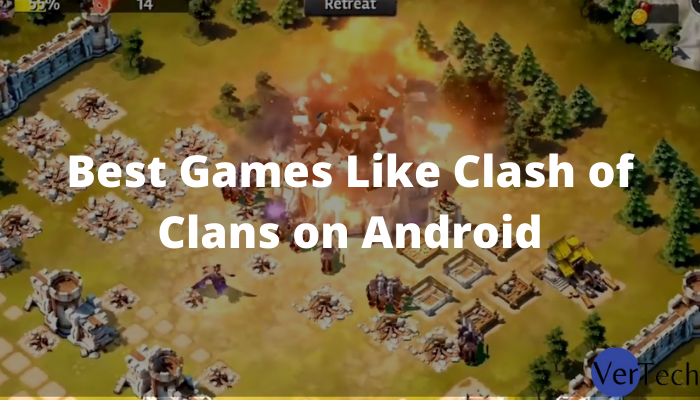 Games like Clash of Clans are those games where the player must build and care for towns and cities. Furthermore, the game mechanics include building defenses, troops, and much more, all to defend your village.

Clash of Clash is one of the most popular games in the city building genre, and many are looking for more games of this type. So if you’re looking for city-building games for Android phones, the list that our website created will show you lots of amazing games to play.

One of the best games like clash of clans you need to know about is Gods of Olympus. As the name implies, the game takes place in ancient Greece. Also, in this game, you’ll control several ancient gods that are famous in Greek mythology, and these gods will be your troops.

Among the various Greek gods of Olympus that you will control in-game, some of them are Zeus, Athena, Ares, Aphrodite, Apollo, Artemisia, and Hades, and several others.

Not to mention that the game has other exciting mechanics, constructions are made instantly, and you don’t have to wait for hours. That’s one of the things that a lot of people complain about the Clash of Clans, and that flaw just doesn’t exist in Gods of Olympus.

Ever heard of that famous dragon training game known as Dragon City? Now imagine how incredible a merger between Dragon City and Clash of Clans would be. That’s exactly the idea of ​​Dragon Clash: Pocket Battle, the game mixes the best parts of these two games.

In Dragon Clash you will build a village that is actually a sanctuary for dragons. In addition, the main objective of the game is to increase and make your army stronger, all this in order to expand the kingdom and become unbeatable.

A positive point of the game is that it is super light, and will run on weaker cell phones. Feel free to enjoy this perfect battle game like clash of clans.

Hero Sky is a village building game very focused on strategy, in this game you’ll have to think a lot to win the battles. For those who like the battles between clans present in Clash of Clans, they are also in Hero Sky, just join one of the thousands of clans available.

An interesting thing is that in Hero Sky, your troops are known heroes from the real world. Several mythologies and famous stories speak of warriors and female warriors, such as Zeus, Vikings, Greek warriors and etc, and here in Hero Sky they are present, these historical characters who are your troops.

Your goal will be the same as in Clash of Clans, to build an impenetrable village, in the same style of city building that Clash of Clans brought to us many years ago. Of course, Hero Sky also has its own qualities and differences from Clash of Clans.

The company that created Clash of Clans is called Supercell, and many don’t know it but they have another amazing game similar to Clash of Clans. The name of this game is Boom Beach, and it takes place on an island in the middle of the ocean.

Like Clash of Clans, Boom Beach is also a village building game, but its entire theme is tropical and oceanic, that is, you will build an incredible island full of military weapons. You can attack enemy islands to gain resources, and these resources can be used to upgrade your buildings.

That’s why I strongly recommend playing Boom Beach, because even being inspired by Clash of Clans, this game here has a whole different style. Maybe you like the tropical style that Boom Beach offers.

Just think what a city building game would be like, but based on the heroes of Marvel and DC, imagine how cool it would be. That’s the idea of ​​Clash of Kingdoms: Heroes War, and that’s why the game was very successful on Android and iOS phones.

Your mission will be to be the commander of a kingdom, and you will recruit several heroes to fortify your kingdom. Therefore, the heroes will be responsible for securing their base against enemy and zombie attacks. Besides that heroes will be used to attack enemies in search of resources.

If you like online games to build and defend cities, Clash of Kingdoms: Heroes War has a different proposal, and maybe the game could be interesting for you.

Jungle Heat: War of Clans is a village building game, and its theme is tropical. The game takes place in a place that was dominated by mercenaries, and your mission is to fight them and make the village grow. This game is one of the most famous and differentiated Clash of Clans-like games.

In the game you will build a military base, and fight enemies both online and offline. In addition, an interesting positive point of this game is undoubtedly its graphics, which even being very beautiful, the game is still light to run on weaker phones.

However, many might think that the game could be a copy of clash of clans, but my friend, when you play it you will see that it is not quite like that. Jungle Heat: War of Clans has its own details, which make it a unique game.

The forth one on the list of best games like Clash of Clans is Sky Clash. Among the most differentiated games on this list, without a doubt Sky Clash: Lords of Clans 3D is one of the coolest.

The game design is full and fictional and inspired by aerial islands. As the name implies, this is a village building game set in the sky, and you’ll battle against flying islands of opponents online and offline.

Besides the cool design, the gameplay is also interesting, because the developer focused on that. If you are looking for cute and light games to play, I strongly recommend you to check out Sky Clash: Lords of Clans 3D.

Now I’m going to talk about Lunar Battle, one of the coolest games like Clash of Clans. What initially caught the attention of everyone who has played it is the fact that Lunar Battle is a village building game set in space.

Lunar Battle mixes construction simulation with space battles, and the result is this amazing game. In the game, in addition to facing other players online, you’ll also need to defend yourself and attack aliens and space pirates.

Simply because Lunar Battle has this space theme, it’s already worth playing. But if you still want one more reason to try it, I’m going to say that this one is not a simple game, you will need a lot of strategy to win, this is the biggest positive point.

Zombies Collision 2 is not a simple village caring games like Clash of Clans, as this game has a whole story behind it. The game tells that Doctor T has transformed several humans and living beings into zombie mutants, and that’s why a zombie threat is on the way and about to explode all over the world.

Your mission here will be to become the captain of a base, and create powerful heroes to fight the threat that is about to appear in the world. So, following this zombie idea, the Zombie Collision 2 game will unfold.

The heroes that the game offers you are several, among them are several heroes from Marvel, DC and much more. In the game you can control these heroes and also make them stronger, to defend the world through your base.

Cloud Raiders is one of the oldest games like Clash of Clans, as it was released around the same time. Therefore, its main positive point is the huge amount of players, and many of them have been playing for years, since the time of the game’s release.

Cloud Raiders graphics are cartooned, that is, they look like a cartoon and are very colorful. Personally I thought it was really cool, the fact that the game is very colorful and visually beautiful.

In Clash of Clans you only have two maps, your main village and the builder’s village. But here in Cloud Raiders you have several maps, and that makes the game longer and less cloying.

Don’t forget to share this article with your friends and family members.