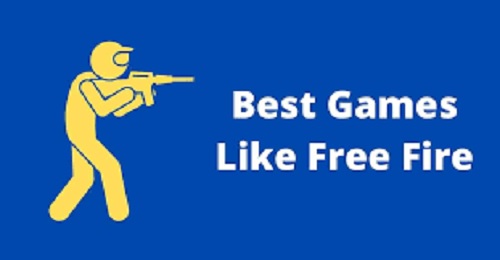 Games like Free Fire are very popular nowadays because the Battle Royale genre is becoming more and more successful worldwide. However, many people are looking for alternatives to Garena Free Fire either for a variety of reasons.

So now I’m going to show you cool games that are similar to Free Fire, all running right on your Android phone or iPhone too. It doesn’t matter if you have an Android phone or an iOS phone, these Free Fire games here will run smoothly.

If you want to know more cool games to play, here on the site, I’ve already made several lists of good games, so check out the best games for you to play on mobile here on the site.

Remember that the list below is organized randomly, the games are not sorted in order of quality or anything like that. However, you can find us on the Wired.co.uk and we are continuously growing to build our site.

In terms of graphics and gameplay, one of the games similar to Free Fire that cannot be missing from this list is Scarfall: The Royale Combat. With a size of just 353 MB, this title doesn’t even take up much space, while ensuring a good gaming experience.

Maybe it’s one of the lighter games on that list. The gameplay rules are the same as in any Battle Royale game. This game has the mechanic to revive up to three times. But there’s one thing that I found simply amazing, you can also play the game offline.

You also have the option to change the difficulty of the bots, or you can leave it on automatic and the game will try to put the bots playing according to your skill.

Omega Legends is a futuristic Battle Royale set in a universe known only as “Ω”, which has been taken over by radioactive waves! Choose a Hero and use your skills to defeat opponents. Fight alone or join your friends in intense matches with 100 other participants.

The game is very fluid and weighs only 453 MB, that is, it is a very light game and will run on any weaker cell phone. In terms of gameplay it resembles Fortnite a lot, both in weapons and in character movement, it is like a mix of Garena Free Fire and Fortnite, since the game doesn’t have those construction mechanics that Fornite has, that’s why it looks like a fusion of the two games.

In terms of graphics, yes, Omega Legends is very similar of Fortnite, having that cartoon style very characteristic of the game by Epic Games. If you think Fornite’s graphics are beautiful and you like the gameplay of Free Fire, then yes you have found the perfect game, as Omega Legends uses the best features of each of these games, that is the idea of ​​the game.

Before Fortnite came to Android and iOS, there was already a similar Battle Royale game option, and it was Creative Destruction. The game was developed by Titan Studio, but was later purchased by Netease games.

Creative Destruction is a real sandbox-based battle, just like Fortnite, but for mobile devices. Now that Apple and Google have removed Fortnite from their platforms, it’s time to take another look at the game that actually cloned Fortnite for mobile devices, and which is also very reminiscent of Free Fire.

The game is a clone of Fortnite, but just because it’s a clone doesn’t make it a bad game. When Fortnite was released it faced its first big hurdle, which was optimization. But like Creative Destruction is a Battle Royale game similar to Free Fire, and it runs on weaker cell phones.

For those looking for some games similar to Free Fire, the Creative Destruction is an excellent option. Since its advantage lies in the style of play that is Battle Royale, and also because it is a lighter game.

Although there are some bots in the game, just like any other game of the genre has, here at Creative Destruction the bots are very well made, they look like real people and sometimes there’s no way to tell them apart.

Respawnables is a third-person shooter and battle royale for mobile phones, and in the game you play the role of a soldier with the most varied missions to complete. Created to be a fun and very fast game, the game has more than a hundred missions to be completed, and for that you can play both online and offline.

By opting for the online mode, you can choose between single or team game modes. In addition to each victory of your team in the mode between teams, or yours in the individual mode, various bonuses will be received in your account, and can be used for you to perform various improvements, which can be in characters, weapons and so on.

Among the available improvements are well over 50 items, attributes, varied abilities and dozens of different weapons. Winning online matches will also grant access to several unique elements of the game, which can also be purchased for real money on the game’s website, but even so the game is not pay to win.

The weapons available are well balanced and the gameplay of Respawnables is very fluid too, making this a great game for this list of games like Free Fire.

Like every Battle Royale, the game puts players in a closed scenario, which is being surrounded by a thunderstorm, and the objective is to survive in the fight with 99 other players. This difficult task, however, can be performed in pairs or in teams of four players.

The game’s differential appears right after the application starts. The player can choose whether to be Max, a soldier who had an accident and received an ultra titanium column, or Zero, who is a female cyborg who doesn’t understand human feelings. Once chosen, the character can still be customized, from the face to the clothes.

I’ve played Cyber ​​Hunter a lot in the past on my cell phone, and now I play on my computer, as the game has a mobile and PC version as well. The interesting thing about this game is the amazing gameplay, which makes the game very good to play.

An example is when you are walking in a high place, if you jump you will be able to glide, and this helps a lot in the movement of the character.

Developed by the same team as Rules of Survival, Ride Out Heroes is a 100-player multi-class Battle Royale that lets you play individual and team matches to see who survives to the end. But unlike other Battle Royale, main players can choose heroes from several characters.

Five heroes are available at initial launch, each with unique characteristics, epic weapons and five different abilities. For example, players can choose Hasan or Robin Hood, who can fire blinding arrows and deal damage from a distance.

Players can assemble their favorite combination with up to two unique abilities and come up with their own strategy to form a team and defeat enemies. So reviving after the knockout is another feature that sets Ride Out Heroes apart from the competition and brings more adrenaline and tension to the game.

Also the knocked down player will transform into a baby dragon. If the baby dragon survives the attack within the next 30 seconds, it will return to the battlefield assuming hero form. As a baby dragon, players even have the option of disguising themselves as scene items to hide from enemy attack.

The mobile version of PlayerUnknown’s Battlegrounds surprised by having as its main mission to bring the PC and Xbox One experience to the palm of users’ hands. And the result was an excellent mobile version, the game was very light and is running smoothly on weaker phones.

The crux of PUBG Mobile is survival. There is no plot. It’s gathering, killing and avoiding getting killed. The game has several different modes that have been slowly changing with game updates – but they revolve around Classic and Arcade modes.

Classic is 100 players crashing on one of three maps so far. Arcade modes varied game duration, map size or restricting weapon selection. The game also offers third and first person perspective, allowing you to choose how to play.

There are teams and voice chat for cooperative games. You can invite friends to the game and play as a suitable team, or just get paired up with strangers. Voice chat is fully controllable, although the speaker is enabled for team play by default.

Players are spread across the island unarmed and must find and use various weapons and items to eliminate opponents, in the same style as other Battle Royale game. Find the best weapons you can: assault rifle, pixel gun, smg, machine guns and other weapons. Dominate the battlefield by beating each opponent and becoming the last survivor. Grab your pixel gun and shoot.

Also the location of the battlefields is a distant island with a dead city somewhere in the sea, surrounded by a mysterious Blue Zone. Your main task is to stay inside the safe zone and eliminate all your enemies.

The big difference from this game to other games of the style is clear, it has square graphics very reminiscent of Minecraft. Not to mention that this left the game very light and running on any low configuration device.

Battle Royale 3D – Warrior63 is one of the perfect alternatives for those who want games similar to Free Fire, as it is based on the same principle as Battle Royale. Players land on a barren island and look for weapons to defend themselves and eliminate other players. The graphics are also very reminiscent of PUBG, another famous Battle Royale game.

The game has the ability to play both in first and second person, both gameplay styles are well done, and very similar to PUBG gameplay.

Battlelands Royale is on the top position of best game like Freefire list because of its engaging gameplay and attractive visual graphics. Like other Battle Royale games, Battlelands Royale doesn’t have a story. Instead, you are a character thrown into battle and will have to fight for your survival. As the number of survivors decreases, so does the size of the arena and this limits your opportunities to find ammo and other items.

But what makes it different is its top-down perspective and cartoonish visuals, which give it a more arcade feel. Dominate the arena in Solo mode or join forces with fellow fighters in Doubles. Team up with three of your friends and take on the world in squads! Choose your landing site, crash, loot weapons and armor, and prepare for the fight of your life.

Also a huge map with several amazing locations. So whatever your strategy, don’t get caught by the storm! Earn trophies in every battle and climb to the top of the world rankings.

Also frighten your enemies with rare and legendary characters that will make them tremble at the base and wish they had stayed home! Collect cards to upgrade your characters and unlock additional customization spaces for dances and melee weapons.

What Is content://com.android.browser.home/ All About? Set Up content com android browser home

How To Use Infinitikloud On Android Phone?

Reasons For Buying Smartphones From Huawei

Why Should You Buy Huawei Products?

A Guide For Better Cybersecurity & Data Protection For Your Devices

How Can You Prepare For CCIE Enterprise Infrastructure?

How to Watch Movies Online Free on 123movies