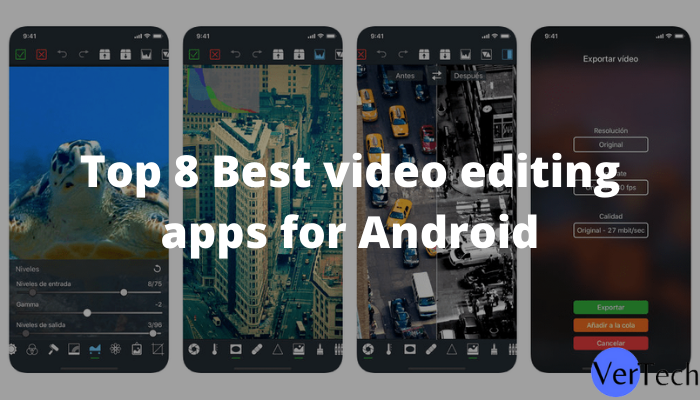 If you are someone who is interested in the world of videos and filmmaking, perhaps working as a YouTuber or content creator, then you must know how important video editing is.

Whether it is for professional work or just for fun, you cannot deny that video editing is an integral part of any video production. Many tools are available for editing videos, both offline and online. While editing youtube videos on a laptop can be fun for youtubers, it is often something that many users might not have.

However, when it comes to Android devices, you have an even more comprehensive range of choices due to the open-source nature of Android. So, let’s move to our top picks of best video editing apps for android.

PowerDirector offers a full range of video editing tools such as splitting, merging, and trimming clips. You can even add sound effects and voice-overs to your videos to help them come alive. What we liked most about the app is that it comes with 25 unique special effects and filters that can be applied in real-time while you’re editing.

Another nice feature of PowerDirector is that it features over 300 transitions, titles, and effects to choose from. You can use these clips in your videos to give them a professional touch. What makes this app even better, in our opinion, is the fact that it lets you edit 360-degree videos, which are supported mainly by Virtual Reality headsets like Google Cardboard. It is definitely one of the best video editing apps for Android if you are looking to create incredible videos in no time.

Just like most apps, Super Video Editor might take time getting used to if you’re new to this type of tech. However, once you get the hang of it, using this app will be super easy and fun! You can add multiple songs to your video, trim clips, and add filters or transitions to give it a professional touch. The app also lets you record videos straight from the camera interface, which makes it easy for anyone to create decent videos with ease.

If you’re looking for an app that will help you do basic video editing tasks while offering numerous features, Super(Video Editor) is probably one of the best video editing apps for Android.

Kinemaster is a well-known editing tool for Android devices. The app features a dedicated interface that lets you cut, merge and trim videos, just like a few other apps on this list.

What we liked most about this app is that it can be used to cut and merge videos in just a few taps. You can also add music and text to your videos to give them a professional touch. The best part about using Kinemaster for editing is its speed and stability. It’s definitely one of the most stable video editing apps that we tried on this list which makes it our top pick.

EZ Video Editor is one of the most popular video editing apps for Android. It’s been around on Google Play for a while, which means that it has got enough feedback from its users to be stable and offer decent features. The app lets you cut, merge, edit videos right on your smartphone or tablet without any hassles.

You can easily add music and movies to your videos using this app which is a great feature, in our opinion. You can even customize the clip speed or add sound effects/ voiceovers to make it fun to use. The best part about EZ Video Editor is that it’s simple and quite easy to use, even for beginners. However, there are some in-app purchases that you might need to buy if you want all the features, which is a bit of a turn-off.

Power director is yet another popular video editing app for Android smartphones and tablets. It’s been around on Google Play for quite some time, which means that a large number of users have tested it. The app lets you edit videos in just a few taps, which is excellent.

What we liked most about using Power Director for video editing is its user-friendly interface and multitude of features. It’s perfect for beginners as well as professionals because of the fact that it offers options to customize your videos. You can modify the speed of a video, add sound effects/voiceovers and also use its various transition effects to give your video a new look.

Powerdirector offers free and paid versions, so if you are looking for an app that provides tons of features without any hassles, then this app must be in your best video editing priority.

FilmoraGo is one of the best video editing apps for Android devices that provides the ultimate editing interface. The app features a unique interface that makes editing videos on your smartphone fun and simple at the same time.

What we liked most about FilmoraGo is its speed, stability and simplicity. It’s lightweight and works flawlessly on most Android devices that we tried it on. You can use its vast amount of effects, transitions as well as titles to make your videos look like a pro. The best part is that the app offers support for both video and audio formats which means you can easily manage multiple files in one go.

FilmoraGo is one of our favorite video editing apps for Android. It’s packed with tons of features and offers a free trial to users so you can try before you buy. However, there are some in-app purchases if you want advanced tools but considering the quality it provides, they aren’t pricey at all.

Adobe Spark is a video-editing app that comes preloaded on some Android phones. It’s a great video editing app that lets you edit videos, add music and even create slideshows easily on your smartphone or tablet. The best part about Adobe Spark Video is its simple user interface which means anyone can use it without any hassles.

What we really liked about Adobe Spark Video is that it automatically creates stylish videos for you in just a few taps. You can even use its gorgeous templates to completely change the way your video looks. Another great feature of the app is that it lets you create videos using your own photos and clips which makes it unique.

The app also lets you add text to your videos or photos which makes it one of the best video editing apps for Android that we’ve tried out in a while.

Adobe Spark Video offers free as well as premium versions so if you’re looking for an app that offers tons of features without any hassles, Adobe Spark is definitely one of the best video editing apps for your Android device.

Magistro is a free online video editing app that lets you create gorgeous videos with just a few taps. All you need to do is pick a style, add photos and videos and the app will automatically edit them for you. The best part about Magistro is that it offers tons of options to make your videos look like a pro. Once you are done creating your video, you can share it with friends and family instantly via social media sites.

What we really liked about Magistro is that its simple interface makes editing videos fun and easy. There are dozens of themes to choose from as well as music tracks to make your videos look even more stylish. The best part about the app is that it lets you create free versions of your video which means you can share them with friends or use them as a background for other apps.

So these were some of the best video editing apps for Android that let you create great videos with ease. If you haven’t tried them before, definitely give them a shot and share your feedback in the comments section below.