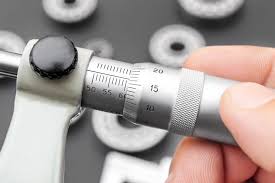 What is a Micrometer Screw Gauge?

A micrometer Screw Gauge is a measuring instrument that is used to measure the outer dimensions of a given object with precision. A screw gauge consists of 2 scales – a pitch scale and a circular scale – which account for calculating the dimension correctly upto 2 decimal points. Micrometer Screw gauges are more accurate as compared to vernier calipers.

Every screw gauge has 2 common parameter – a pitch and the least count:

Pitch = Distance moved by the screw / Number of rotations

The working principle of the Screw Gauge is based on the movement of principle. It converts the smaller distances into larger distances by measuring the rotations of the screw on the pitch scale. The final dimension is calculated by adding the measurements taken from both the scales.

Differential Screw is one of the important components of the ordinary screw gauge as it allows calculation of smaller dimensions with ease. When the screw is rotated 360 degrees, it covers a small axial distance on the barrel thus allowing to calculate the dimension with better accuracy.

To measure the dimension of any object using screw gauge, candidates can follow these simple steps:

When the Spindle of the screw gauge has been tightened completely without placing any object in between and if the zeroes of both the scale do not match, it is known as the zero error of the micrometer screw gauge. Zero errors are of 2 types – positive zero error and negative zero error.

How to correct Zero error?

Zero errors can be corrected either by adding or subtracting them from the final measurement.

For positive zero error, the number of lines zero below the pitch scale is multiplied by the least count of the screw gauge and then this number is subtracted from the final reading of the micrometer screw gauge.

While, in case of negative zero error, the number of lines above the zero mark of the pitch scale are to be multiplied by the least count and then added to the final reading of the micrometer screw gauge.

Screw gauge is a measure device that is used to measure the outer dimension with an accuracy of 0.01 mm. It is mostly used in industries to:

The Top Rated Hoverboard for Kids