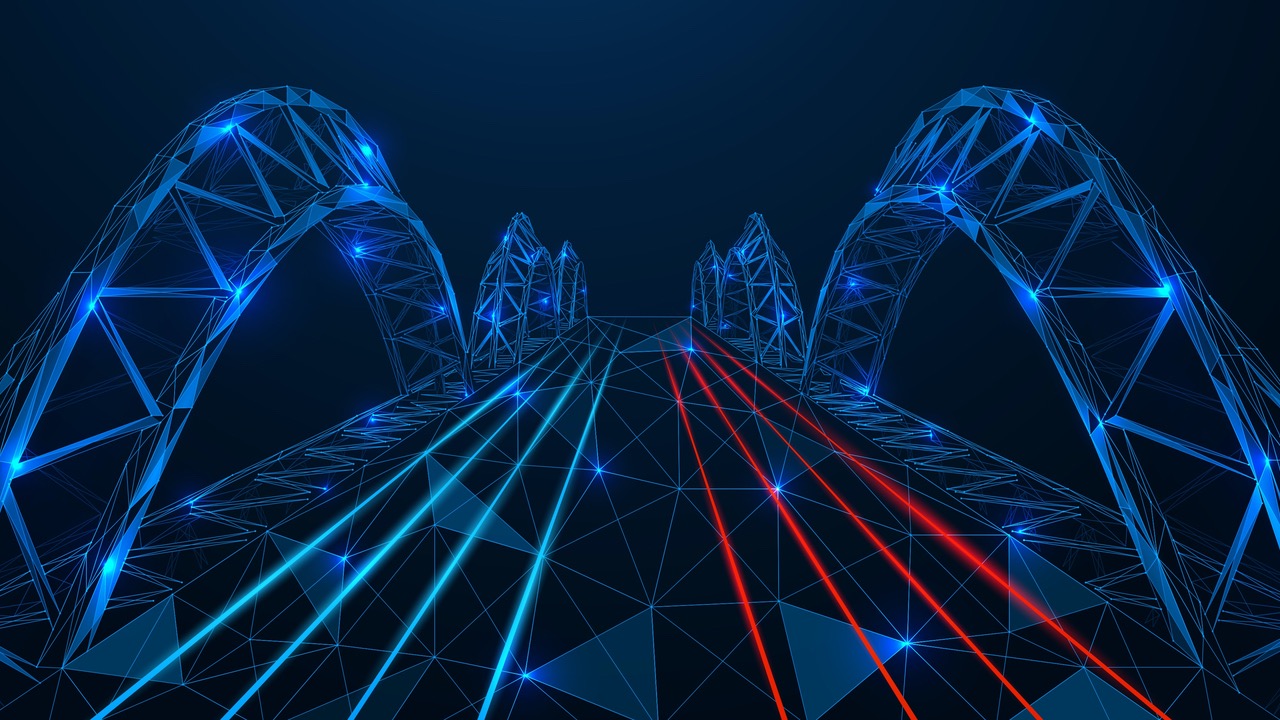 A blockchain bridge is a way for tokens or other information to move from one blockchain to another. Blockchain bridges are made to help solve the problem of limited interoperability, which is one of the biggest problems blockchain technology is facing right now. They let dApps on one chain talk to dApps on another chain and help connect different blockchains. This turns the blockchain landscape into an ecosystem where applications can talk to each other and change and grow.

We’ve already said that blockchain bridges make it possible for different networks to work together, like Ethereum and Bitcoin. But you need to go back to the basics of blockchain development services to fully understand bridges. The important thing to remember here is that each blockchain has its own standard and set of rules that are rarely compatible with other chains.

Because of this, you can’t really move tokens from one chain to another. Tokens made for chain A follow a different set of rules than tokens made for chain B. But even though this problem may seem impossible to get around, it can be done. This is made possible by what we call “wrapped tokens,” which are fake versions of real tokens that are made to work with a different token standard.

Blockchain bridges use wrapped tokens to make it easier for blockchains to talk to each other. This is how everything works.

When a user uses a bridge to send cryptocurrency or other assets from one network to another, the assets are not really moved. They are instead kept on the network through smart contracts or other ways. On the blockchain, an equal number of wrapped tokens are made, to which the assets are “sent.” Once the user decides to claim their assets, the new tokens are destroyed and the original ones are unlocked.

For example, if you sent a Solana coin to an Ethereum wallet through a bridge, the Ethereum wallet would get a wrapped token, which is basically an ERC20 version of the original SOL token.

Trusted bridges depend on a governing body or authority to keep everything running smoothly. Members of this kind of bridge are required to give up control of their assets to a governing body. They are a reliable way to move large amounts of assets. But there aren’t as many trustworthy services out there as there used to be. This could force people to trust smaller, less well-known companies. Wrapped Bitcoin (wBTC), which lets Bitcoin users look into the opportunities of Ethereum, is one of the most popular trusted bridge projects.

On the other hand, trustless bridges are less centralised and are thought to be the safer way for users to send coins to each other. Smart contracts and code-based algorithms are what make them work. This makes the system more secure because the way it is run is the same as the way blockchain technology works. Because smart contracts are used, users are able to keep control of their money and assets. Some people might think that trustless bridges are safer. They stop the chances of corruption and deliberate bad behavior. But, as we’ll see in the next section, decentralised bridges are not perfect.

Why do Bridges need to be a part of Blockchain Technology?

Blockchain networks are not controlled by one person or group. Instead, they are run by their own rules and communities. Even though all of the data stored on the chain is completely open, the network’s infrastructure is set up to serve a separate ecosystem. Even though blockchain technology has worked well in some situations, it is too isolated, which slows down the development of DeFi and other decentralised apps. Instead of using the functions of different dApps to help growth, the technology is limited because different chains can’t talk to each other.

Blockchain bridges provide a way for blockchains to work together securely and in a way that is compatible with each other. They also open up a lot of possibilities.

Bridges can help improve the abilities of dApps by giving them a way to use the strengths and opportunities of different blockchains. They let protocols change, which leads to new and creative solutions.

Scalability and Drop in Fees

Scalability is yet another big problem that blockchain bridges can help solve. As blockchain grows in popularity, different networks will need to be able to handle more transactions and process them faster. With their ability to make cross-chain transfers possible, bridges can be used to make scalability solutions in which the transaction load is split between chains that are linked together. Also, bridges make it easy for users to move their assets from a network with high fees, like Ethereum, to a platform with low fees.

It’s important for different blockchains to talk to each other so that DeFi and other dApp development services can change, grow, and meet the needs of a changing world. Blockchain bridges are able to get around the single network barrier in the blockchain space because they get around the fact that blockchains are siloed. So, DeFi progress will be made possible.

Is there any risk of using Blockchain Bridge?

Even though bridges may be bulletproof in their final form, they are still a fairly new way to get from one place to another. In their early stages, bridges pose a number of problems for the blockchain.

When it comes to building bridges, you can’t say enough about how important smart contracts are. This is especially true for decentralised bridges, whose core functions, like minting and burning wrapped tokens, are run by programmes that run on their own. If smart contracts are poorly written or not optimized, they could leave holes that bad actors could use to take advantage of. One such case is the Wormhole hack from February, in which a hacker stole 120,000 wETH by taking advantage of flaws in smart contracts.

When it comes to trusted bridges, one person or a small group of users has control. If some transactions are not in the best interest of the people who run the bridge, they can stop assets from moving over the bridge.

Collusion formations are another risk that comes from putting all the trusted bridges in one place. Members of the governing body have the ability to get together and steal money from users.

Blockchain bridges are a step toward making the Web 3.0 more open so that different networks can talk to each other and work together. Because of this, we can expect to see a lot of progress and new ideas in blockchain technology. With the help of bridges, blockchain could become more useful and easy to change. But there are a number of problems that need to be fixed so that security risks, bad habits, and mistakes in the technology don’t happen.

Everything You Need to Know About Personal Alarm Systems for Seniors