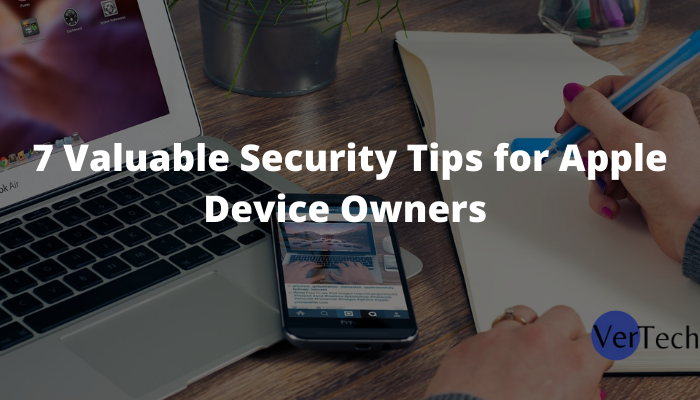 Security on Apple devices might not be as big of an issue as it is on other operating systems. macOS and iOS stand as one of the most reliable when it comes to dealing with malware and other threats.

Nevertheless, it does not mean that you can simply forego the idea of creating a proper cybersecurity routine for your devices. No, even if the odds are lower, they are still there, and you do not want to risk it.

In this article, we will cover some of the most important things that you need if you want to protect your Apple devices from potential threats.

Let’s start with a 2 Factor Authentication. It is one of the more recent systems that exist to create an extra security layer on digital devices.

2FA requires two steps rather than one to access devices. In other words, it will not be enough to just enter your password. There is an extra step as a safety net.

Now, if you are someone who finds this specific method a bit redundant and unnecessary, you can always learn how to turn off 2 factor authentication and not have it. But then again, it would mean giving up on additional security.

Switch to a Safe Internet Browser

Safari, the default internet browser for Apple devices, is not necessarily the best option as far as security goes. Even Google Chrome has ad blockers that stop potentially dangerous ads from appearing on your browser.

Brave, Tor, and Firefox are the three internet browsers that are considered to be the most secure out of what is available at the moment.

Of course, it also helps when a user is smart about what they do on the internet. Combining a secure browser with good habits, such as using DuckDuckGo instead of Google or ignoring fishy messages, makes for a safer internet environment.

Also, read 5 Tips For Safe & Securely Disposing Of The Data

Virtual private networks are another example of how a service can come in handy if you wish to feel safer on the internet.

It is true that VPNs also let you change location and access geo-restricted content on the internet, but many users rely on these networks for safety and privacy.

For instance, you might want to join public Wi-Fi while on your MacBook or iPhone. Doing so is not the best idea because public networks lack security. But with the help of a VPN, you can encrypt your browsing and not feel too worried about potential attackers getting to you.

Since VPNs cost a couple of dollars per month, investing in such a service is not expensive, and the money is worth it considering what virtual private networks provide.

Getting rid of old files is another example of what some people do not realize if they are concerned about cybersecurity.

If you plan to sell your smartphone or laptop, then you have to take the necessary steps and remove traces of yourself. It might even take it to reinstall an operating system to give the device a clean slate, but the step is necessary.

Data backups are not necessarily a direct way to prevent cybersecurity threats from corrupting files, but you will feel better knowing that there is a copy of data that you can utilize in case something happens to the original files.

As an Apple device user, you will likely rely on iCloud to back up files. The default plan, which is free, gives you 5GB of storage. It can be enough for users with not that much data, but those who need more will need to pay a monthly fee. You can get as much as 2TB of storage on iCloud.

There is also an alternative in the form of external storage accessories. An HDD or a USB flash stick is not necessarily as convenient as cloud storage, but plenty of people still prefer it as the go-to method.

Antivirus software is a given, but it is a bit tricky when it comes to macOS and iOS. In fact, it is not that common to bother getting antivirus applications on mobile devices in general, even though that should not be the case.

For MacBooks, on the other hand, they come with some built-in protection tools, but they are still not the same as proper antivirus software.

Keep in mind, though, that just installing antivirus software is not enough. You also need to have it run in the background and perform custom disk scans on a regular basis.

Updates are the last thing to note. Whether we are talking about operating systems or individual applications, the rule of thumb is to prioritize updates.

How To Browse The Web Securely?

5 Tips For Safe & Securely Disposing Of The Data