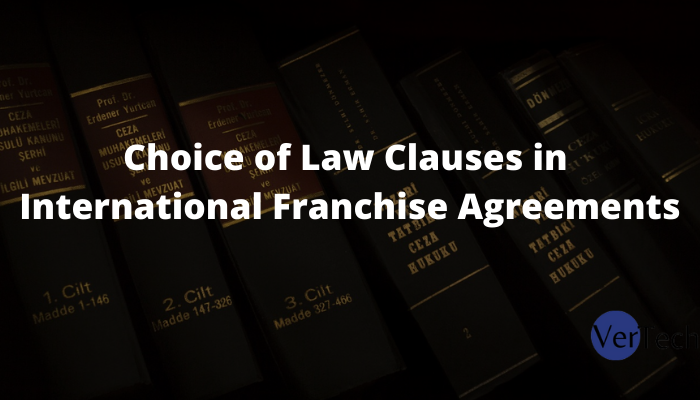 Most U.S jurisdictions do not limit the choice of law adopted by franchisors but others limit the jurisdiction, that’s why you should consult a lawyer for an international master franchise agreement to know where you stand. Uncertainties will undoubtedly arise where the parties to a contract are based in countries because each country has its laws.

Advantages of a Choice of Law Clause

Including choice of law clauses in franchise contracts is standard practice today, and comes with the following benefits:

A choice of law clause in a franchise contract specifies the applicable laws when conflicts arise within the business. All the parties–the franchisor and master franchisee know which country’s laws govern the contract beforehand.

Familiarity with the applicable laws ensures the disputing parties are certain of how disputes or other issues will be addressed. The choice of law has a great impact on the outcome of a case plus you cannot be caught off guard.

The limitations of choice of law clauses can include:

How Use of Language Impacts Choice of Law

One word may have different meanings in different scenarios and it’s important to eliminate such loopholes that could cause conflicts. The wording can vary by industry, business, or contract but the universally accepted language used to draft a choice of law clause should be something close to the following:

You must understand that courts can interpret a choice of law clause differently thanks to the drafting language applied. It would be unwise to use boilerplate language which may result in different interpretations in different courts or jurisdictions. Using standard language can help address other issues that are likely to occur in master franchise businesses.

Difference between Choice of Law and Jurisdiction

The terms “choice of law” and “jurisdiction” are often erroneously used interchangeably in contract drafting language, but they don’t mean the same thing in law. Choice of law clauses specifies which country’s laws are applicable in interpreting a franchise contract while jurisdiction specifies the court where the parties within the franchise can be file a lawsuit. A court in one country might be forced to apply the laws of another country when resolving a conflict or issue.

The language used to draft the choice of law clause can be modified in a way that both the jurisdiction and applicable laws of only one country are used. The laws of the preferred country under the choice of law clause don’t matter much but the country of jurisdiction matters very much because the litigating parties have to travel to that country for court proceedings.

How Can a Lawyer for an International Master Franchise Agreement Help?

Related Topics:best lawyerLawyer
Up Next

Know What is Constructive Dismissal